I’ve started a health adventure because I really wanted to lose weight.

Yeah, I know, people have been trying to say that losing weight isn’t really a good goal. I should say I’m trying to make better health choices or live a healthier life style.

I say, “Let’s not argue Sematics. I like to play with language and meaning.”

Anyway, the reason I’m writing this isn’t because I want to debate words and meanings.

I wanted to talk about Cake and Choices.

You see, I like cake. I really like cake. Also baked goods. I mean, sugar mixed with flour (and other ingredients) placed in an oven for 30 minutes at 350 degrees usually results in something sweet and tasty. It’s really hard to say no to cake.

That was a hard first lesson.

I had to avoid places I knew there was cake. That meant not attending staff birthday parties because the temptation would be too great. That also meant not stopping at the Depot in town to get one of their super sugary, but very tasty cupcakes. I mean, while we’re mentioning things I gave up, I gave up getting medium Dunkin Donuts Mocha ice coffee. There, you’ve heard my whole confessional.

At a certain point I realized that I had to stop telling myself No all the time. No cake. No creemees (soft serve for some of you). No ice cream. No nothing? This does not seem sustainable in the long run. I’m going to eventually cheat on myself.

So I finally told myself yes. Let’s have a creemee. My husband and I were celebrating our Anniversary (five years). I tried really hard at dinner to be good, but we tried a new restaurant and it wasn’t what I would call an ideal dining situation. I needed something to top off the day, and my husband suggested the creemee.

It was an especially tasty creemee from a place called Jonathan’s. Pomegranate flavored. There was a lot going right with this situation. It definitely made up for dinner. Actually, at the time, I remember that it seemed like almost too much. I didn’t need this whole creemee (but I mean, I ATE it.)

I didn’t even count that creemee in my food tracker.

I week or so later I bought some other creemee based dessert. It took me three days to eat it because I portioned it out. I learned that I could have treats. I could sometimes say yes.

But more importantly, I learned that saying Yes or saying No to treats is a Choice. It’s my choice.
That’s kind of empowering because it’s no longer about the things I can’t have.

Yeah, that piece of cake looks good, but do I really want cake right now? Is it worth going off plan? Does that cake fit into my day? I mean, I can say yes but I can also say no. Either choice is okay, as long as I think about it first.

Most days I pass up the cake. I do sometimes splurge and eat Gelato. Don't hate on me. It takes me a month to eat a pint of Talenti Gelato.

Today, I went to the staff birthday party. The cake looked good, but not so good that I felt like I needed to say yes. So I didn’t. I still got to socialize, and there was maybe a little twinge of an awkward feeling because I was the only one not eating cake.

It also felt good to know that it was my choice, I could have eaten it. I just didn’t choose to.
at November 01, 2017

You might think that everything is easy for me. I mean, this whole weight loss adventure is just all peaches and cherry blossoms. Nothing ... 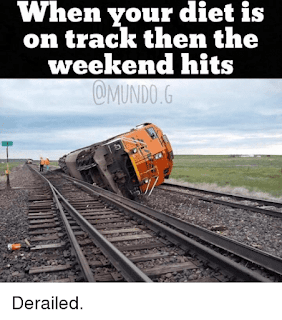